Back in 2008, we purchased our very first Electric Renault Kangoo Ze. Great van with over 100 mile range, perfect for local food delivery. We had this converted into a fridge van by CoolVan based up North in the United Kingdom. The setup was rather basic, 2 x 100amh lead leisure batteries, designed to power a hubbard fridge system, that on peak load drew 70amps at 12v, and once the fridge had reached temperature, load draw was around 55amps. This meant the fridge would last between 3-4 hours on a good day. It was then helped by a 100w flexible panel attached to the roof contributing another 20-30amps of power per day. Nice little setup.

We started getting into problems during the summer, when after a hot day, the van would run out of battery power to run the fridges, and the batteries would come back totally depleted. We'd put the batteries on charge, as we would every night but they wouldn't take a charge. Only after resorting to a specialist slow charge system, or letting the solar cell drip charge the batteries the next day would the battery take charge again. This resulted in many days when the van would be off the road for safety reasons, no fridge, no van.

After exploring battery technology further, it was clear these batteries were not suitable, and the setup they'd been placed into wasn't fit for purpose. Lead batteries should only be depleted to approx 50% of their capacity, this is 'depth of dis-charge' where as we were depleting them to 100%. Eventually we'd totally ruined the battery, and the power the battery was able to provide diminished quickly.

After getting quite up-set with the installation, we were provided 2 new lithium batteries. Each 100amh, costing around £800 per 12v battery. These would give a much better depth of dis-charge, safely, resulting in a similar amount of cooling time from the fridge, but in a way that preserved the life of the battery.

A number of changes were made to the setup to ensure we didn't do the same damage to these batteries as we did to the first set of lead batteries.

1) The first change was the battery charger.

Lithium chargers work differently to standard lead/agm battery chargers in a number of ways. Lithium batteries do not like being over charged, so the charger limits the amount of current to a set level, until the battery reaches a specified (often customisable) voltage, and then the charger switches to power supply mode only. You will often notice a sharp rise in voltage toward the end of a charge cycle as the current drops off quickly.

Lead chargers work in a very different way. They often have 3 phases of charge, bulk, absorption and finally float. After the battery is 80% charged, the charger moves to a different phase as the charge current is reduced.

What I have learnt is that most lithium chargers have an algorithm that will enhance the lifespan and performance of the battery. Leaving a lead acid battery charger connected to a lithium battery is therefore not best practise.

We installed a marine battery charger (CTEK PRO25S 12V 25A Smart Charger) charging at 25amps which would feed the batteries over an 8 hour cycle, whilst the van wasn't in use at night. This was a replacement for the CTEK MXS25 which is designed for lead batteries only. 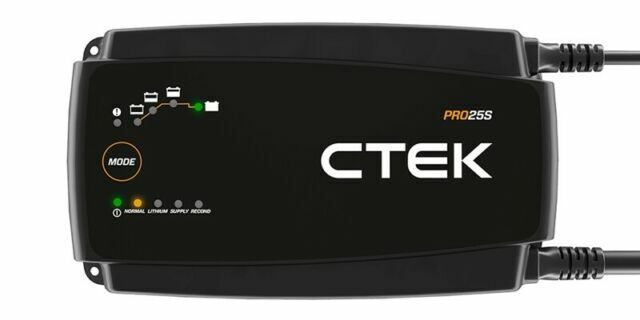 2) The next addition to our setup was a battery protect system. We opted for a Victron system, with a smart interface. As the unit was installed within a sealed area, this allowed for remote monitoring and adjustment of the system.

We installed the Smart Battery Protect to ensure that the fridge system would shut down, when the batteries got to a point of depletion that was safe. Without this automatic shut down system, the fridge would deplete the battery completely, we would see a reduction in voltage within the cells, and again in the long term the life of the battery would be reduced significantly. The BMS we opted for was the Victron Smart BatteryProtect 12/24V-100A, this was more than sufficient to handle the peak 70amp load. Unlike Victron's battery management system, we connected the positive loads through the setup, and through the bluetooth application informed the system that we were running a lithium setup. A very small number of settings allow you to configure the what is essentially a large relay to suit your needs with alarm options to suit.

We've managed to convert the first of our vans over, and its working incredibly well. We are now in the process of upgrading our 100w panel, to a much larger panel, which will increase our current input into the battery from 4amps per hour at 12v to around 10amps per hour, in good weather, which I look forward to covering in a future post.

I hope we can be of help to you with your own solar and energy challenges. Feel free to write to us as hello@nextdaysolar.co.uk with your questions.